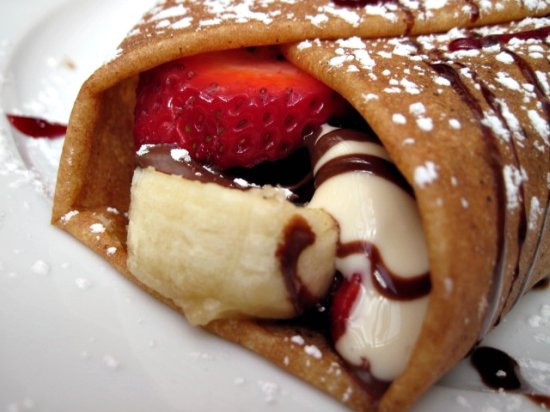 Does your Nana have a sweet tooth?  Then you can’t go wrong with a brunch date to Crepes ‘n Crepes with her favorite grandchild this Grandparents Day, September 8th.  Try something from their Sweet Dessert menu like the Fraises Avec Nutella (Strawberries with Nutella) or my favorite, Crepes Suzette (lemon juice, carmel, butter, sugar and Grand Marnier.)  Your palate  will thank you!

Crepes ‘n Crepes Sunday hours are 8:80 am to 3:00 pm.  Remember to make reservations for parties larger than six, you don’t want Nana to wait on her special day.

Now, a bit of history about our favorite French delight…

The origin of Crepes Suzette and its name is disputed. One claim is that it was created from a mistake made by a fourteen year-old assistant waiter Henri Charpentier in 1895 at the Maitre at Monte Carlo’s Café de Paris. He was preparing a dessert for the Prince of Wales, the future King Edward VII of the United Kingdom, whose guests included a beautiful French girl named Suzette.  This is told by Henri Charpentier himself in Life à la Henri, his autobiography.

Another claim states that the dish was named in honour of French actress Suzanne Reichenberg (1853–1924),who worked professionally under the name Suzette. In 1897, Reichenberg appeared in the Comédie Française in the role of a maid, during which she served crêpes on stage.  Monsieur Joseph, owner of Restaurant Marivaux, provided the crêpes. He decided to flambé the thin pancakes to attract the audience’s attention and keep the food warm for the actors consuming them. -source

Whatever the truth may be, we love our darling Suzette just the same.